While the general cryptocurrency market is recording profits over the last 24 hours, Bitcoin Cash (BCH), Bitcoin SV (BSV), Litecoin (LTC), Huobi Token (HT), Ethereum Classic (ETC), are in their bear markets.  The cryptocurrencies have reached the oversold regions of the market. Presently, the altcoins are in bullish momentum recovering from the previous losses.

Bitcoin Cash (BCH) is in a bear market. The bulls have been making concerted efforts to come out of the downtrend. One of the attempts is the breaking of the resistance line of the descending channel. This may bring about a change in trend. The upward move is delayed because of the intense selling pressure at the $240 resistance.

BCH is approaching $238; a break above $240 resistance will push the price to the high of $275. A possible move to the next resistance at $350 is likely if the bulls break the resistance at $275. On the downside, if price turns from the minor resistance of $240, the cryptocurrency may drop to a low of $200. In other words, BCH will resume its sideways move between $200 and $240. Nonetheless, Bitcoin Cash is at level 50 of the Relative Strength Index. This indicates that BCH is rising and it is in the uptrend zone. 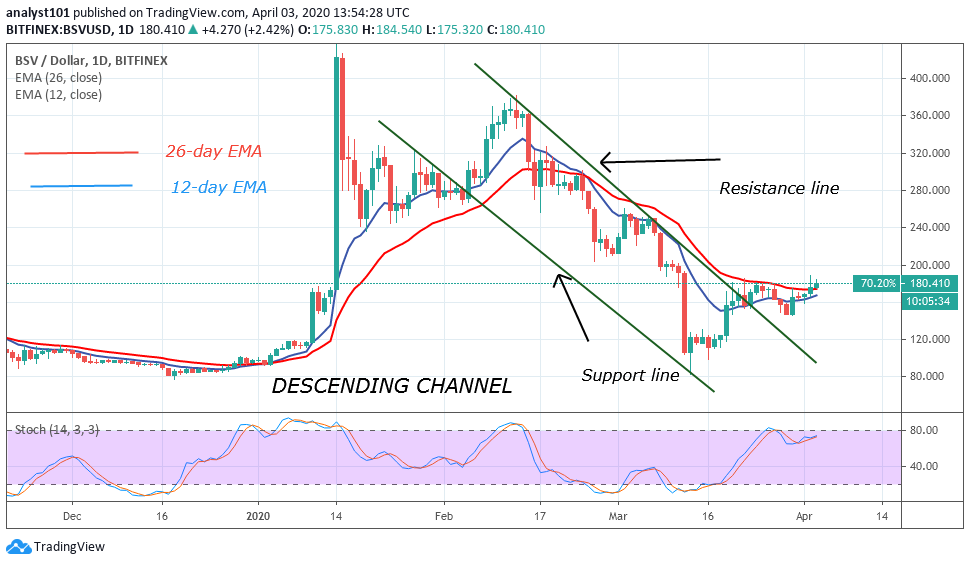 Bitcoin Satoshi’s Vision (BSV) was earlier in a downtrend as the market reached a low of $100. The bears made two unsuccessful attempts at the low of $100 to break it. The support was held as the bulls made an upward move.

Litecoin (LTC) is in a bear market. The pair is currently trading above $40. The pair was earlier oversold at the low of $28. Recently, the bulls emerged and pushed the coin to a high of $40. The bulls also broke the resistance line of the descending channel. 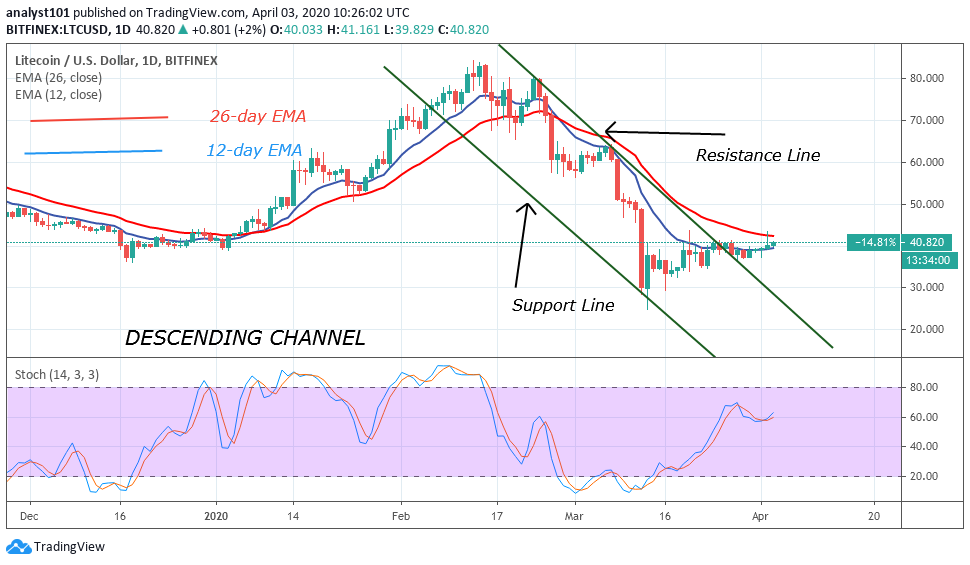 The implication is that there is likely to be a change in the trend. Currently, the market is in an upward move to reach the next resistance at $43.On the upside, if the bulls break above the next resistance at $43, Litecoin will reach the target price of $50. Nevertheless, the current momentum will extend to a low of $60. In the meantime, Litecoin is above 60% range of the daily stochastic. LTC is in a bullish momentum.

Huobi Token (HT) is in a bear market. Recently, the bulls made an upward move to the recent highs. The bulls found penetration difficult at the $5 resistance. In the first attempt at the resistance, the market fell to a low of $4. After a repeat retest on the second and third occasions, the downtrend resumed. 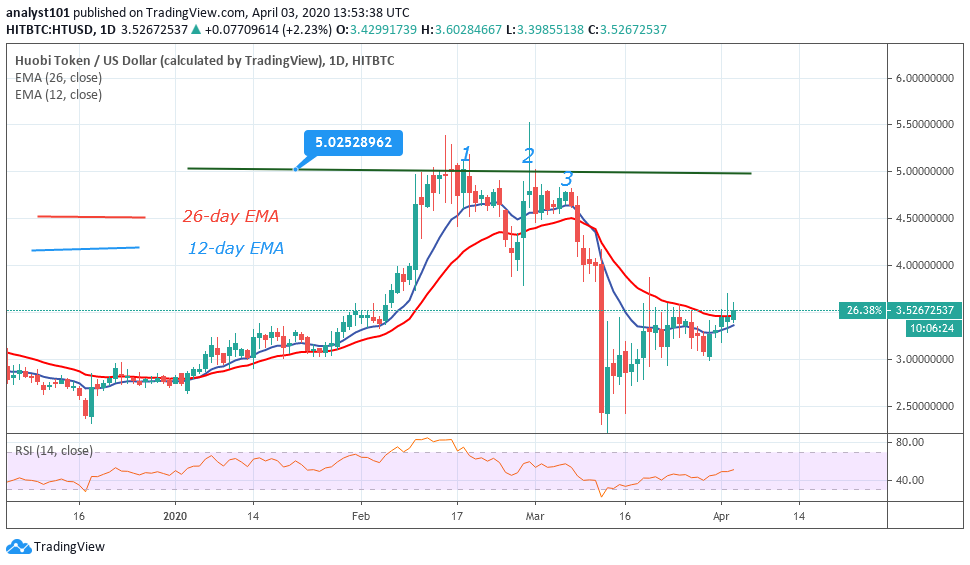 The price action also formed a bearish triple top pattern. This was responsible for the reversal of the previous uptrend. The downtrend resumed to a low of $2.40. The current support is holding because it is the previous support of December 17. The market has gone up to revisit the previous highs. HT is at level 51 of the daily Relative Strength Index. It implies that the market is in an uptrend and above the center line 50.

Ethereum Classic (ETC) is in a bear market. In the last bearish impulse, on March 12, the altcoin fell to a low of $3.68 which was the previous low of December 17. The support is holding as the bulls make an upward move. 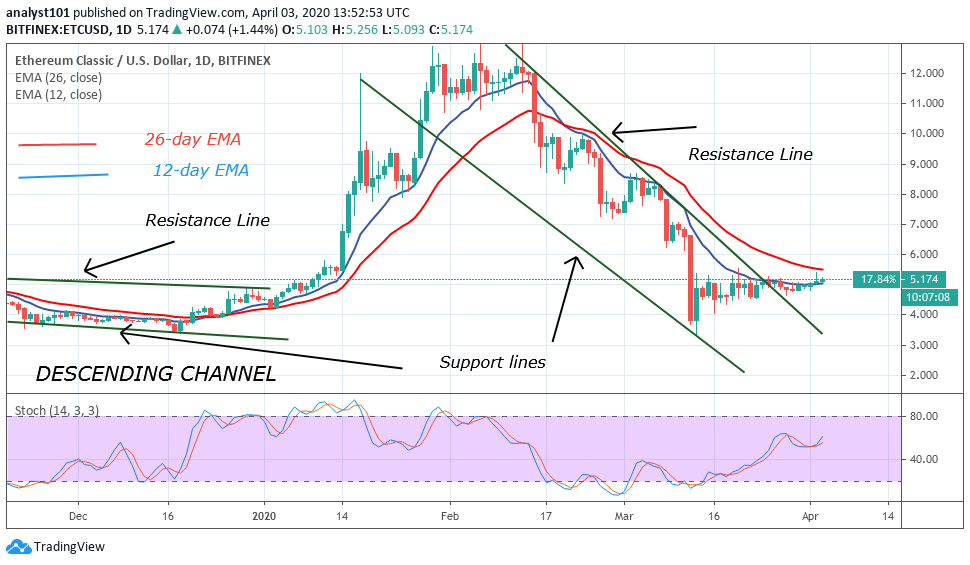 The bulls have broken the resistance line of the descending channel. This implies that the market will have a change in the trend. The bulls are currently facing resistance at $5.20 and $5.50. On the upside, a break above $5.20 and $5.50 resistances will catapult the coin to the high of $7.0. Meanwhile, the cryptocurrency is above 50% range of the daily stochastic. It means that ETC is in a bullish momentum.