Litecoin (LTC), Stellar (XLM), Monero (XMR), Skycoin (SKY), and Zcash (ZEC) are still in bear markets. The recent upward moves by the cryptocurrencies were voided by sellers at their respective resistance levels. The altcoins lost their bullish gains as the market made a downward move. The coins are getting ready for a fresh upward move.

Today, Litecoin (LTC) has fallen to a low at $42 after the bulls were resisted from the high of $47. Before this time, the bulls have been making frantic efforts to push LTC to the previous highs. At first, the bulls push price from its low at $28 to $40. The market went into a tight consolidation between $36 and $40 because of the bulls’ inability to penetrate the $40 resistance. On April 6, LTC rebounded at $40 low to reach a high of $47.

On the downside, if price further sinks below $42, LTC will reach a low of $35. On the upside, if the bulls sustain price above the current level, there could be another possibility of a rally. At the moment, LTC is above 80% range of the daily stochastic. The pair has reached the overbought region of the market. Sellers have emerged as the market continues its downward move.

Stellar (XLM) is currently trading at $0.048 after a downward move. The coin is recovering from the low of $0.0300 after the bearish impulse of March 12. The bulls have already moved price to the high of $0.051 but it is retracing from the recent high. As the market retraces, it is likely to find support at $0.045. The support at $0.045 is the historical price level of December. 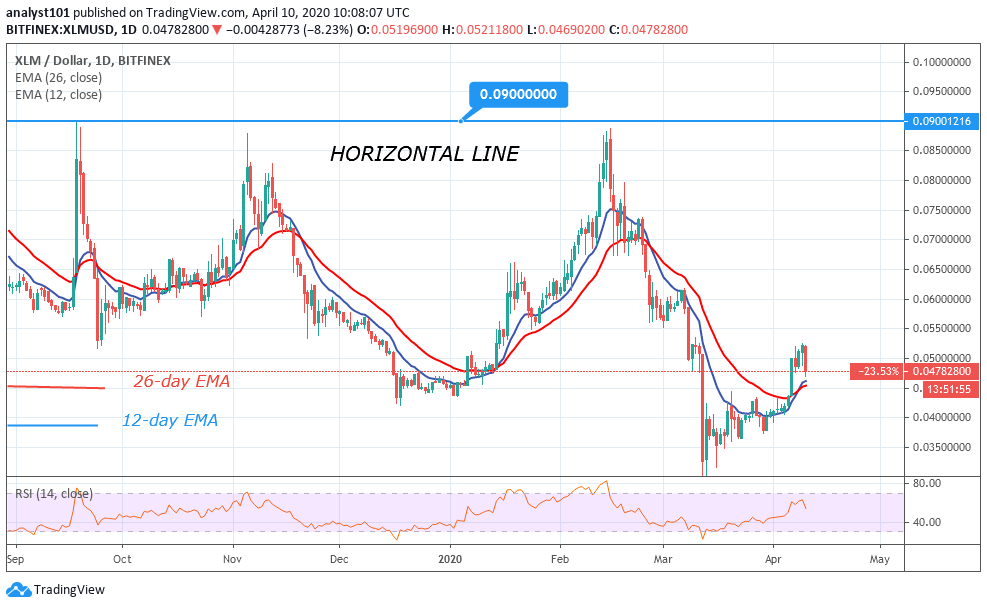 The market consolidated above this level and rebounded in December. The upward move was tremendous as it reached a high of $0.0900. Today, the market has reached a low of $0.048 at the time of writing. The pair may resume a fresh uptrend if the price falls to $0.045 low. Stellar is at level 54 of the Relative Strength Index. This indicates that the pair is in the uptrend zone and above the centerline 50. The market is likely to make an upward move. 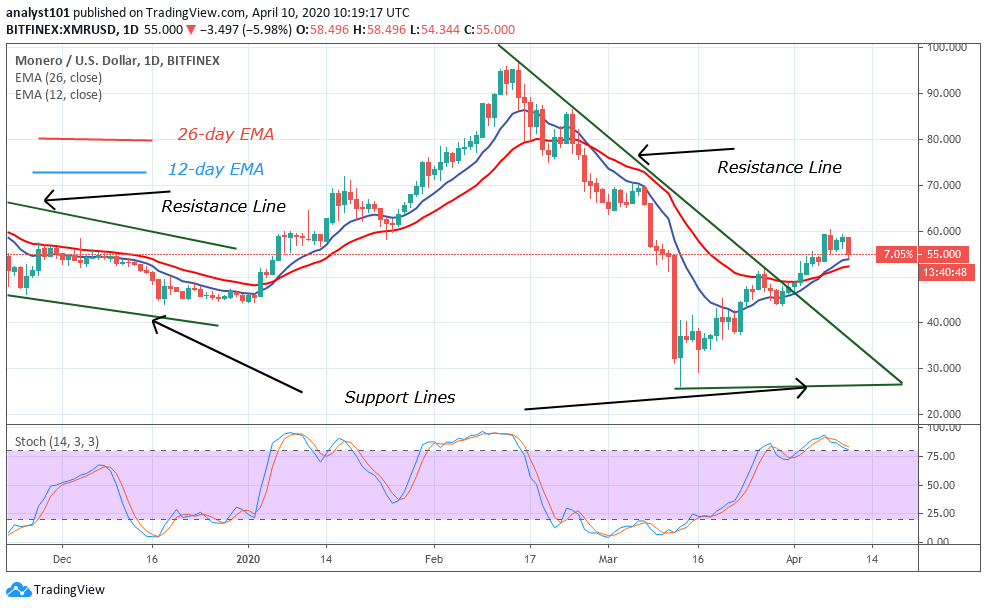 Recently, Monero (XMR) resumed an upward move after breaking the resistance line and the resistance at $55. The pair rose to a high of $60 and become overbought. Sellers emerged at the overbought region to push the cryptocurrency downward.

However, an upward move is possible if the coin finds support above the EMAs. Monero will rally above $60 and reach the high of $70 if the resistance at $55 is broken. However, Monero is still above 80% range of the daily stochastic. The market is still in the overbought region. It implies that sellers may emerge to push prices downward. 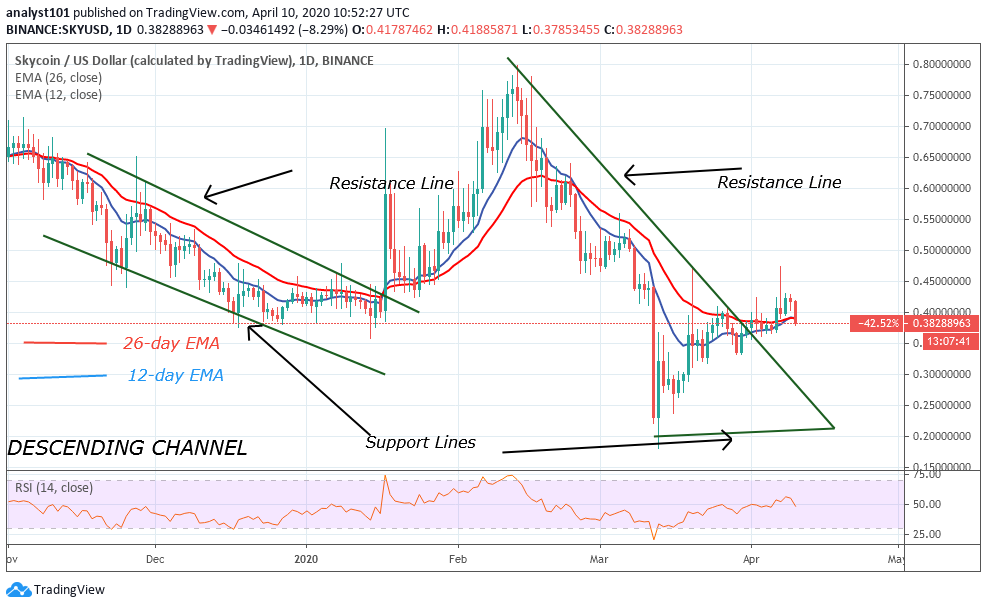 Skycoin (SKY) is in a bear market. In its last bearish impulse, the pair fell to a low of $0.20. Immediately, the bulls resumed an upward move to reach the previous highs. The coin reached a high of $0.450 but was resisted. The market is now on a downtrend but approaching the low of $0.3838 at the time of writing.

Skycoin will find support at the $0.35 low, then resume an upward move. Skycoin is at level 48 of the Relative Strength Index. This indicates that the pair is in the downtrend zone and below the centerline 50. The market is likely to make a downward move.

Zcash is in a bear market. The pair was earlier in a bull market when the market reached a high of $70. The bulls were resisted after a retest at the $70 resistance. The initial fall was at a low of $50. The market finally dropped to a low of $20 after the bears broke the $50 support. 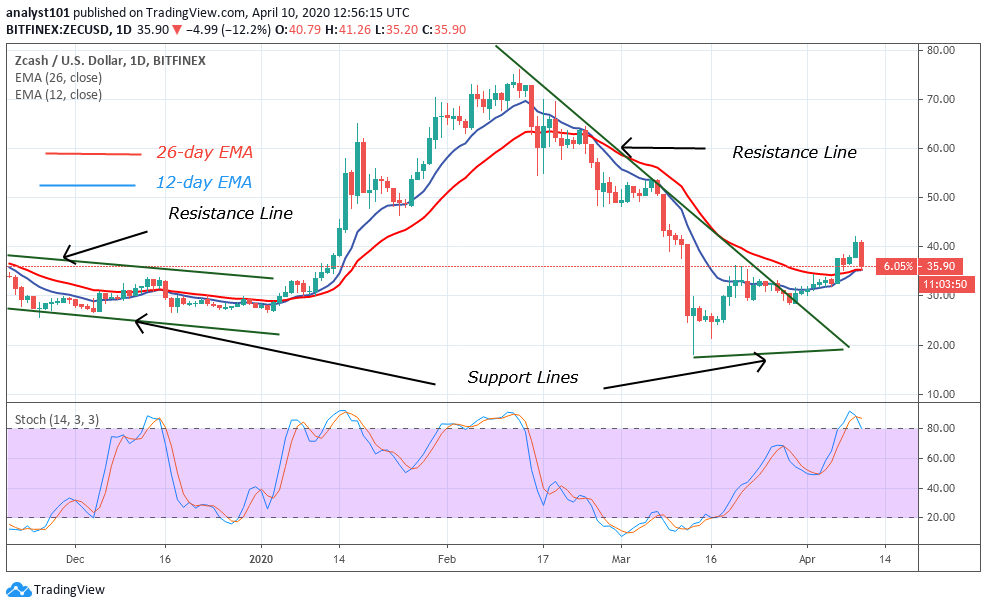 The support at $20 was held as the market resumed upward move. The bulls have broken the resistance line but it is facing resistance at $40. The upward move will resume after a retracement. Nonetheless, ZEC is still above 80% range of the daily stochastic. The market is still in the overbought region. It implies that sellers may emerge to push prices downward.