It’s time to call it.

The doomsday naysayers were WRONG. This is not 2008.

Each week, a different America 2.0 sector breaks out higher.

Take the cornerstone of our American economy: housing.

This was one of the hardest-hit sectors in March. And it sparked the 2008-repeat rumor to spread.

But it never happened.

Since bottoming out on March 18, ITB has rallied by more than 90%!

Demand for homes has been remarkable considering the circumstances.

Yes, the process of buying a home has changed. But the change has been a great shift to America 2.0.

Online platforms like Redfin and Zillow have reported incredible news this month.

Zillow’s online 3D home tours grew by 525% between February and April, and Redfin reported that homebuying demand is now higher than it was before the lockdowns:

The great news kept coming this week: more new homes were sold in the U.S. in April than in March.

Considering that most states were still in lockdown for much of April, the fact that such a huge amount of homes were sold shows just how much demand there is.

There’s more growth — and gains — ahead.

Something interesting is happening in the crypto world: lots of obscure “altcoins” are skyrocketing seemingly out of nowhere.

These are the crypto equivalent of penny stocks.

They have little to no long-term investors and are driven by sudden bursts in volume which can rapidly take them up hundreds of percent.

I believe this rally in altcoins is actually a bullish sign for bitcoin.

You see, when investors are willing to put their money into the riskiest coins, it shows that there’s a lot of confidence in the crypto market in general.

This is just like the stock market; one of the most bullish signs you can see is small-cap stocks steadily going up.

Another reason this is bullish for bitcoin is that most of these tiny altcoins are denominated in bitcoin — rather than the dollar or any other fiat currency.

That means that people have to buy bitcoin to buy into the altcoins, and when they take profits, they’ll be putting money back into bitcoin.

We’ve also seen the demand for “stablecoins” continue to grow.

On many exchanges, the easiest way to buy large cryptos like bitcoin and ethereum is by using stablecoins, which are created to keep a value of $1.

The most popular stablecoin is tether. And investors are currently loading up on it.

The black line in the chart below shows the number of total Tether transactions per day, and it just made an all-time high this past Monday:

Since tether stays at $1 all the time, investors aren’t buying it just to hold onto it. They’re buying it to spend it on cryptos.

So, the fact that tether transactions are making all-time highs is a great sign.

Why It Pays to Be a Bitcoin Bull

Crypto funds like Grayscale now holds over 350,000 BTC. And crypto lending platforms like Celsius now has over 55,000 BTC.

Smaller buyers are also fueling demand, as the number of addresses with balances of one or more bitcoin have reached an all-time high of 817,806: 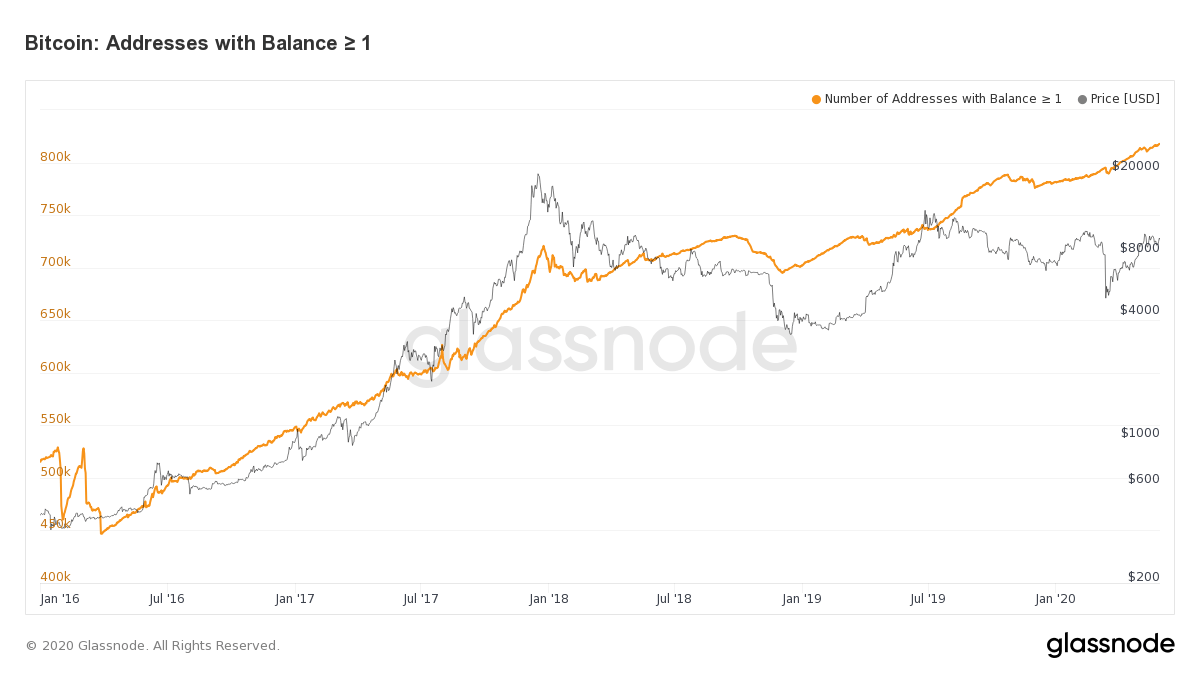 What’s impressive about this demand is that retail and institutional buyers are now substantially more invested in bitcoin than they were at its 2017 peak.

So, as bitcoin continues to move higher, I expect it to fuel demand even more, which in turn will fuel the price.

We’re getting closer and closer to bitcoin $50K prediction.

Today, bitcoin’s just a pop away from $10K post-halving. So I want to know:

Paul has been calling it for a while now. This is not even close to 2008. In fact, we’ve seen an “out with the old” clearing to make way for America 2.0.

We’re entering the greatest bull market of our time … and these two sectors are going to ignite the boom.