The U.S. Federal Reserve, Dallas branch, released a report on the price performance of the major cryptocurrencies and the reaction of the price performance they show to regulatory news. The study, entitled “Cryptocurrency Market Reactions to Regulatory News”, shows how news about new regulations can have an effect on the crypto market depending on the nature of the regulation. The study reveals a particular behavior for XRP.

The study analyzes the behavior of Bitcoin and its forks, Litecoin and Bitcoin Cash. The behavior of Ethereum is also taken into consideration. In that sense, the study says the following:

(…) cryptocurrencies are often thought to operate out of the reach of national regulation, but in fact, their valuations, transaction volumes, and user bases react substantially to news about regulatory actions.

The study creates an index that measures the reaction of Bitcoin’s price to different regulatory news. The same figures are taken for other cryptocurrencies as well. The study describes in more detail: 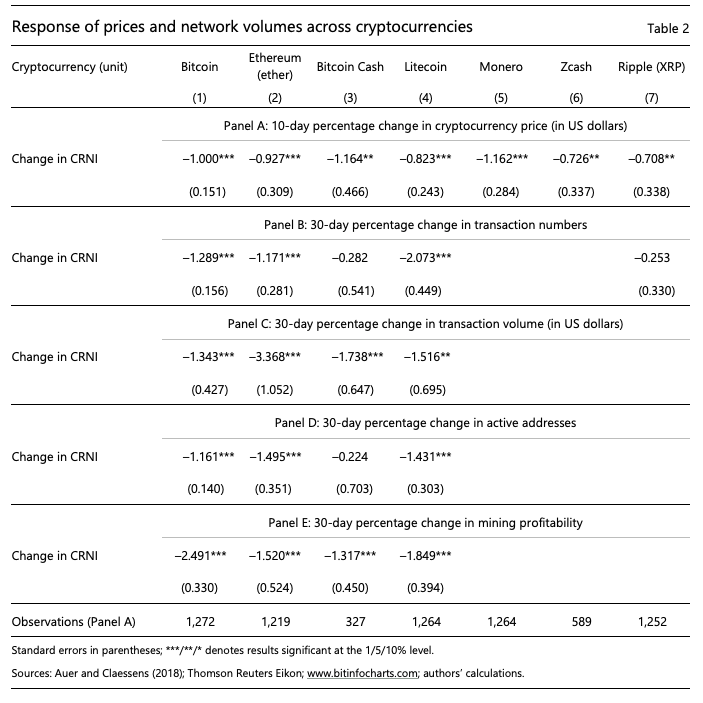 According to the study’s conclusions, BTC price has a high response, rather positive or negative, to regulatory news. In addition, the study finds that Litecoin, Bitcoin Cash and Ethereum have a similar reaction to Bitcoin on regulatory news:

Bitcoin Cash and Litecoin – as well as the second largest cryptocurrency by valuation, Ethereum, react significantly to CRNI (cryptocurrency regulatory news index, columns 2–4). The impact is not significantly different from 1, however, ie they are as strongly affected by these news events as bitcoin is.

Meanwhile, Monero and Zcash showed completely different reactions. Monero is more responsive to regulatory news than Bitcoin. Zcash, on the other hand, has a low reaction to regulatory news. In that sense, XRP shows a similar behavior. The reason can be found in the centralization of the token and Ripple’s supposed control over XRP:

The XRP token also react less, which may reflect that its network of trusted nodes is centrally controlled by its issuer Ripple, making the XRP token distinct from other, permissionless, cryptocurrencies.